Kaizen and KSFs - Benchmarking and KPIs, -dimensions of strategy

The Apple case study presents a great example of Kaizen and KSFs. Understanding the Key Success Factors which drive success and ensuring they form part of a Kaizen process. This article perfectly explains the process with the development of the iPad strategy. Below we provide more detailed definitions of the terms used.

Dimensions of Strategy The Apple Case study Kaizen and KSFs 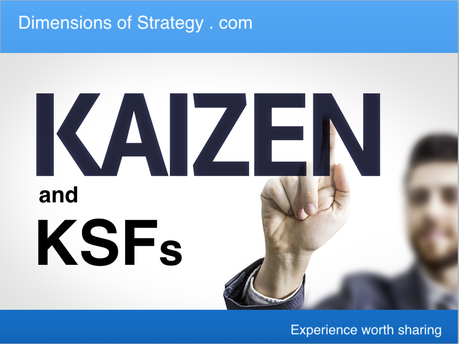 The Corporate Strategist : The iPad 3 is coming – Kaizen and KSFs
Originally posted January 19th 2012
The Apple iPad 3 is coming and could be released in March. Despite the imminent arrival no one is really sure about the final design, look and feel of the product but the Apple strategy of Kaizen and KSFs, a classic corporate strategy execution will be evident. Kaizen – constant improvement of Key Success Factors the mantra – thinner, faster, sleeker, lighter, longer, greater, better.

Initial reports suggested the device would be thinner – 7.3 mm think. Latest suggestions following a glimpse of cover designs for the iPad 3 suggest a thicker version by as much as 1mm could be the outcome.

New features could include higher resolution, “retina display”. The iPhone 4 currently supports the Retina Display with a screen resolution of 960 x 640. This could be the target for the iPad 3.

Better camera with LED flash. The iPad 3 is expected to have a 5 Mega Pixel camera with 1080p or 720p video recording quality at 60 frames per second.

The iPad 3 will come with the latest iOS 5, which will host the multi-touch gesture technology or possibly OS X Lion for the tablet, powered by the quad-core processor.

Apple released the first iPad in April 2010. Within twelve months, in March 2011 the iPad 2 was released. Now twelve months later the iPad 3 will arrive to continue development of the line.

By September 2011, Apple had sold forty million iPads compared to twelve million iPhones in the comparable early stage of launch. The potential for the product is huge.  Yet Apple has never been afraid to cannibalise existing products by launching newer improved version.

Yeah Kaizen and KSFs, the iPad 3 is coming – the Apple strategy continues
JKA

Kaizen, the process of constant improvement
The Japanese-Kanji- word "kaizen" simply means "good change", with no inherent meaning of either "continuous" or "philosophy" in Japanese dictionaries or in everyday use. The word refers to any improvement, one-time or continuous, large or small, in the same sense as the English word "improvement".[5] However, given the common practice in Japan of labeling industrial or business improvement techniques with the word "kaizen" (for lack of a specific Japanese word meaning "continuous improvement" or "philosophy of improvement"), especially in the case of oft-emulated practices spearheaded by Toyota, the word Kaizen in English is typically applied to measures for implementing continuous improvement.